About the Team at
Gasser Wars Magazine! 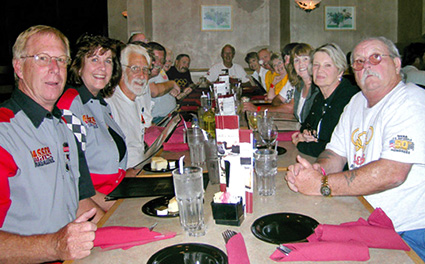 Phil and Dee on the left, with the S&S Racing team and friends, York PA, 2007

We know you've been looking for the best coverage on these unique cars. From the early 60's they've grabbed the spotlight in the drag racing world. We know, 'cause you're here, that you love the old gasser style cars, the Anglias, Willys, Austins, Henry Js, early Olds, Cads, Chevys and Fords. We know how you feel, because we've been hooked on these cars since the 60's, when we were regulars at the West Coast tracks, Irwindale, Lions, Orange County, Bakersfield, Fremont, Sacramento, Portland, Puyallup, Seattle, Arlington. These are the tracks where we sat in the stands and cheered, or roamed the pits and watched the legends of the gas class do thier thing, including K.S. Pittman, Paul Pittman, Mazmanian, Bones Balogh, Jr. Thompson, Johnny Loper, George Montgomery, Barb Hamilton, Airoso Brothers, Ronnie Nunes, The S&S Team, Jim Oddy, Jack Coonrod, and many more.

We also scoured the publications of the day, Drag News and Hot Rod Magazine, Rod & Custom, etc., for coverage of the tracks around the rest of the country. In other words, we are just like you, car nuts and drag fans. Phil and Dee Morris here, married 45 years and still having FUN!

As we grew older, who could ever have predicted that there would be such a surge of nostalgia in the rodding, and drag racing worlds? That so many great old race cars would be found in the strangest places and brought back to life? We started this magazine over 12 years ago, because a friend of ours, Dean Kirsten, publisher of Enfo, stopped publishing his newsletter on Anglias. Phil missed the publication so much, that he wanted to fill the void... Gasser Wars Magazine was born.

Over the years, we've gained an appreciation for the old gassers in their stock form too. So you will find articles in Gasser Wars Magazine on cars that are bone stock, modified street rods, barely street legal, and full out drag racers. So subscribe today and start enjoying the best magazine in the world devoted to all the cars that ran the Gasser class. Once you try us . . . you will be hooked!

<< Back to the Magazine